Categorized as
6681
Tagged as
"Hello"Adele
Related 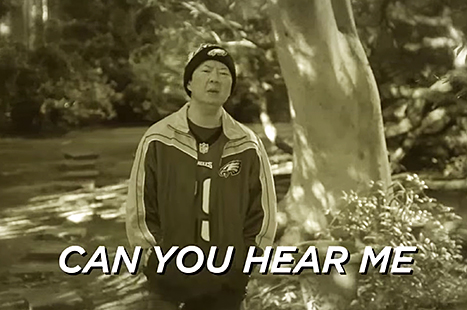 In case you’ve missed any of these, each morning before Sunday football starts, Rob Riggle premieres some sort of skit on Fox’s NFL Sunday pregame show. This week was one for the ages as he spoofed the popular song, “Hello” by Adele.

Riggle even brought in a good comedian friend, Mr. Ken Jeong who stole the show in the movie Hangover. The end result is pure gold.

In the sepia-toned clip, Jeong and Riggle lip sync a wonderfully rewritten version of Hello that’s sung by as a woman who sounds eerily similar to Adele.

“Adele, it’s me. I think I’m breaking up with the Eastern NFC,” Riggle, sporting a giant mustache, mouths. “It might be over for these teams. They say that cream’s supposed to rise, girl, but our division’s curdling.”

Jeong takes over the spotlight when he belts (to the tune of the chorus), “I think I finally get Adele, because loving and losing’s hard as hell. Late game interceptions fill D.C. with shame.” He goes on to croon, referencing the Washington Redskins, “But at least they distract folks from our racist name. It’s so racist.”

Make sure to watch until the very end. This isn’t the first parody of Adele’s song, but it may be one of the best thus far. It was so good even the Fox Sports anchors were in tears due to laughter. Watch it now!