Three-time world champion, Mick Fanning, was waiting for a set of waves during his final run against fellow Aussie Julian Wilson when a fin appeared behind him, clear enough for television viewers around the world to see.

Fanning got the shock of his life as he saw the shark, and tried to get out of its way as fast as possibly. Eventually he managed to escape, and ended up with the last laugh.

“I was just sitting there, I was just about to start moving and then I felt something grab … get stuck in my leg rope,” Fanning said while sitting in a boat not far from where the incident had just happened. 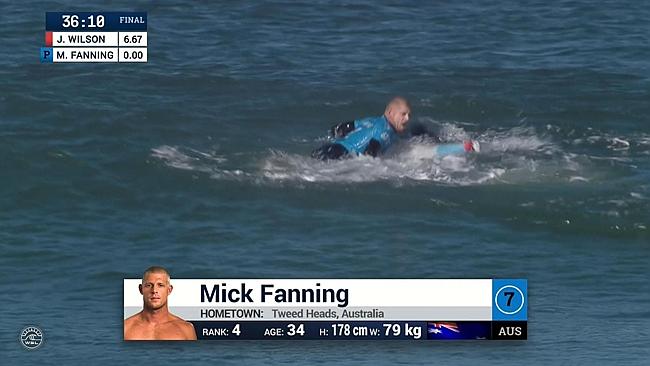 “I instantly just jumped and he kept coming at my board. I was just kicking and screaming. I saw fins. I was waiting for the teeth. I punched him in the back, said Fanning”. He was later interviewed on the beach and opened up about the frightening ordeal.

“I was just about to start paddling again and all of a sudden I had this instinct that something was behind me. Then I started getting pulled under water and the thing came up and I was on my board and it was right there and I saw the whole thing, it was right there. I was getting dragged under by my leg rope,” he said.

“I felt like it was dragging me under water and then my leg rope broke so I started swimming and screaming … I just can’t believe it, I’m just tripping out.”

Asked if he felt capable of finishing the event the following day, Fanning said: “Mate, I’m happy to not even compete again. To walk away from that, I’m just so stoked.”

The J-Bay Open was officially cancelled less than two hours after the shark attack, with Fanning and Wilson splitting the points and winnings. South Africa is well known for shark attacks and sightings of great white sharks.

Just two years ago a 74-year-old man was bitten in half by a shark at the world famous surfing hot spot at Jeffreys Bay. Earlier this year surfers, including world champion Gabriel Medina, sighted sharks while competing at the Margaret River Pro in April.

Last year Kelly Slater caused an Internet meltdown when he posted footage of a dark shadow on a wave he was on at Margaret River. He later admitted he believed the shadow had been a surfer going over the top of him.