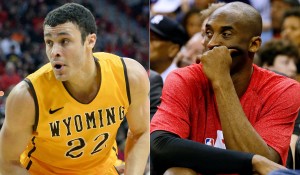 Nance claims he deleted the post, which he originally posted in 2012, moments after he was drafted by the Lakers, but realizes he should have deleted it well before it became publicized: 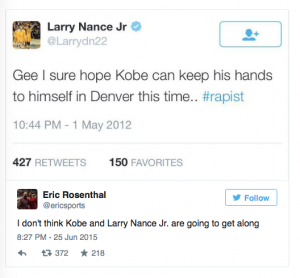 Nance announced that he wrote Mr. Bryant a long text message apologizing shortly after the tweet went viral. During an interview with ESPN’s Jemele Hill, Kobe said the entire situation was “water under the bridge,” but he admits that he was taken aback by Nance starting his message with, “Hi Mr. Bryant.”

“The kid figured it out himself,” Bryant said. “He’s a kid, man. He actually sent me a great message [Friday], which is really funny. I looked at it [the message], and it was like, ‘This is when you know it’s about time to hang these things up, when your teammate writes you, Hi, Mr. Bryant.'”

“I was like, ‘What the f***?’ But it was really nice and apologetic about what had happened. I said, ‘Dude, listen. We’ve all said things and done things that we regret and wish we could take back. It’s water under the bridge, man. Welcome to the team.’ He writes back, ‘Thank you, sir.'”

Many close to the Lakers organization and media members who know Kobe’s personality very well believe the tweet could cause some turmoil between the Lakers first round selection and the cornerstone of the franchise.

ESPN’s Ramona Shelbourne assumed it would be extremely difficult for the two “to get off on the right foot, or any foot at all”:

“I don’t think he’s going to take this very well even if you say it was two or three years ago and even if you say, ‘I’m a different person now and I was a stupid stupid kid back then and I shouldn’t have said it.’ I think this is going to be a problem even if they talk it out. It’s going to be hard to get off on the right foot, or any foot at all.”

The Wyoming alum and future power forward for the Lakers also released a statement on Twitter addressing Lakers fans in an attempt to earn their respect and forgiveness:

“Laker fans.. I know I left a terrible first impression, and I apologize for the entire incident. But I plan to earn your respect by wearing the purple and gold honorably and giving you all I have on and off of the court. Hopefully these next couple of days, weeks, months, I can make you all look past this time and instead look forward to our upcoming season! I’m just ecstatic to be in LA and to play my role in restoring the Lakers to their dominance behind the guidance of my new coaches and teammates! #GoLakers”