5 Fascinating Facts About The Voice

Netflix To Offer Another Revival 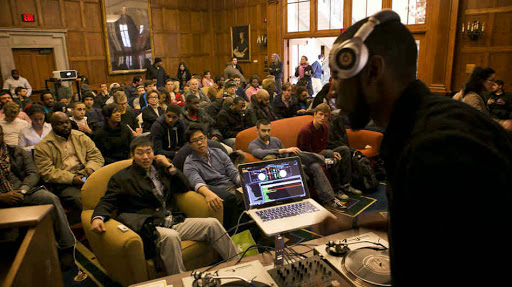 hide caption9th Wonder addresses Harvard students in a scene from the documentary The Hip-Hop Fellow, which chronicles a year the producer spent teaching hip-hop culture as an academic subject.

9th Wonder addresses Harvard students in a scene from the documentary The Hip-Hop Fellow, which chronicles a year the producer spent teaching hip-hop culture as an academic subject.

Hip hop was born back in the early 1970s, around the same time college students were graduating with new majors in Feminist Studies, Environmental Studies and Black Studies. Initially seen by much of academia as marginal at best, PC at worst, those subjects are now considered conventional. Filmmaker Kenneth Price grew up with hip hop, and noticed that over the past decade, a number of prestigious institutions had taken an interest in and were studying hip hop with the same rigor as other disciplines.

"I was curious about this field of hip-hop studies," Price says. "I wasn’t aware of the depth that was happening at these Ivy League schools, and was kind of amazed that no one had made a film of it yet."

So he did by following Patrick Douthit, or 9th Wonder, as he’s professionally known, to Harvard. 9th spent the 2012-2013 academic year as a Harvard Fellow, teaching at the Hip Hop Research Institute. It’s part of the W.E.B. Du Bois Institute, often billed as the most comprehensive collection of African and African-American studies in the country.

At the film’s outset, 9th confesses it was an unlikely scenario, "Nobody from hip hop was supposed to go to Harvard without a degree," he says. "Nobody. To do anything."

But degree or no, 9th turned out to be a born teacher. The filmmaker caught him giving the class a semester-long assignment — to decide, collectively, on a list of albums that constitute standards of the genre.

To do that, students paid attention to sampling: the art of taking snippets of sound from other, earlier records and dropping them into new work. Harvard’s Henry Louis Gates, Jr., heads the W.E.B. Du Bois Institute, and says sampling has a well-established literary equivalent.

"T.S. Elliot. Herman Melville, with Moby-Dick. Ulysses by James Joyce is an entire extended riff on The Odyssey by Homer. That’s how literature works — it’s repetition, with a difference," Gates says. "And sampling is just another word for what, in literary circles, we call intertexuality."

Pulitzer-winning historian Diane McWhorter was another Harvard Fellow during 9th Wonder’s tenure. She says that as he talked about being a vinyl archeologist, she saw how he was using music from her past to explain his present.

"When he talks about being a crate digger — you know, going through all the old LPs to find new stuff? Well, it was a little bit sobering, because the stuff he was discovering was stuff I had grown up with," McWhorter says.

Mixing the old with the new has enabled hip hop to create, as 9th likes to call it, a bridge between generations. Harvard’s Hip Hop Archive is now cataloging hip hop’s lyrics, so they can be critically assessed.

"We have the data to show that to a student," he explains. "’Read this. Now read this. Now what’s the difference? This is more poetic than this is.’ They get the chance to see that."

Hip hop is no longer kids’ music; at 40, it’s officially middle-aged, and 9th Wonder says generational rifts have emerged. Some older hip-hop fans feel their music was more significant, more worthy, than the music younger fans are playing, work the grownups are dismissing as nothing more than noise. Sound familiar? You’ll hear that again in 20 years. Someone will probably write a thesis on it.