The tide is high in this ocean of award shows as more and more nominees flood through.  The best and brightest of television and movies will be honored in early January of next year with the 72nd annual Golden Globe Awards.  Comedy duo Tina Fey and Amy Poehler will be hosting the event, which just announced its potential winners with a long list of nominees. Here are some highlights of those vying for gold. 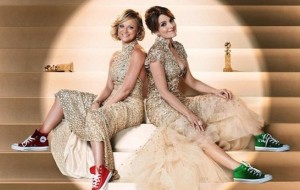 Several hard hitting films are up for the top drama picture this year, including the movie that took 11 years to film, Boyhood.  Other nominees include impactful biopics Selma and The Theory of Everything, which takes a hard-hitting look at the lives of Martin Luther King Jr. and Stephen Hawking.

Famed leading ladies like Julianne Moore, Reese Witherspoon, and Jennifer Aniston are up for the top spot for dramatic actresses, but things seem to be leaning in favor of Rosamund Pike’s enticing and twist-inducing performance in Gone Girl.

Birdman, Pride, St. Vincent, and The Grand Budapest Hotel are all vying for the top spot in musical or comedy, but the favorite to win so far is the star-studded and legendary cast of Into The Woods starring the likes of Meryl Streep, Johnny Depp, Anna Kendrick, Emily Blunt, and Chris Pine.

Best Actor in a Motion Picture, Musical or Comedy

The bar is certainly set high for the comedic men of this year’s films, with the legends of Christoph Waltz, Michael Keaton, Bill Murray, Ralph Fiennes, and Joaquin Phoenix looking to take home the globe.

Best Actress in a Motion Picture, Musical or Comedy

Last and certainly not least we look to the best actress in a musical or comedy for this year’s Golden Globes.  Established actresses like Amy Adams, Julianne Moore, Emily Blunt, and Helen Mirren could take home the trophy.  But there a glimmer of youth in young Quvenzhané Wallis and her nomination for Annie.  Wallis is only 11 years old but has previously received an Oscar nomination as well for her performance in Beasts of the Southern Wild.