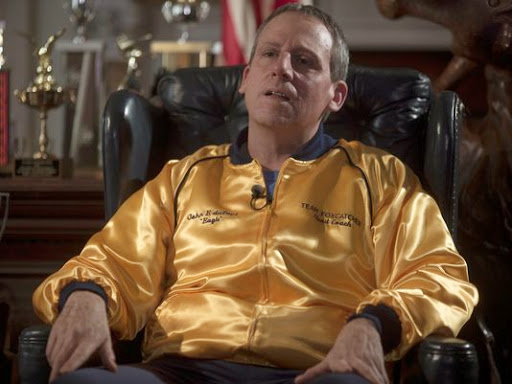 Kevin Jackson saw the paranoia. He saw the drug-riddled delusion. He saw the lost eyes and hallucination-induced fog that enveloped John du Pont.

The multimillionaire and heir to the American chemical empire offered a much-needed financial life raft for sports such as wrestling, swimming and pentathlon through Team Foxcatcher — a richly funded enterprise anchored at a sprawling training facility just outside of Philadelphia.

Du Pont eventually wrestled with his own demons and sank into an abyss that led to the murder of Dave Schultz, his closest confidante and two-time world champion, on Jan. 26, 1996.

The story of Schultz, his brother Mark and others involved with the team is the story behind Foxcatcher, the movie scheduled for limited release Friday. Team Foxcatcher and du Pont, the manic man behind it.

"I never humored him like, ‘Yeah, Mr. DuPont, I see the wall move or this vase coming in and out of focus, or when it rains in the forest, there’s Disney characters running around,’" said Jackson, a 1992 Olympic gold medalist sponsored by Foxcatcher from 1990 to 1995 and now Iowa State’ wrestling coach. "He thought people were crawling through the walls and spying on him.

"At one point, du Pont was carrying a pistol around. He was that paranoid. My point to everyone was, ‘Worst-case scenario, he’s going to shoot somebody.’"

Du Pont, played by Steve Carell in the movie, operated on a long leash in terms of athlete acceptance and sport governing group USA Wrestling, because the man lacking so much mental stability provided stability of another kind — more money, for more people, than ever before.

That unmatched financial support in a relatively fringe sport lured talents such as Jackson, and a long line of University of Iowa competitors that included Tom and Terry Brands, Troy and Terry Steiner, Royce Alger and Joe Melchiore.

"Yeah, du Pont was eccentric. He was this, he was that," said Terry Brands, an assistant coach for the Hawkeyes. "But the bottom line, it was a great atmosphere for a lot of guys to train and a great resource."

Opportunity, however, began to unravel into a world of anxiety and fear.

"I’d stay in the big house," Jackson said. "So when I came back from the practice facility, I’d come through the house singing or whistling or something, because obviously there was a man in the house carrying a pistol. You didn’t want to be walking around the house making any sudden noises or surprising someone."

The mind of du Pont surrendered to the chaos, leading to a stunning turn of events.

Jackson received phone calls from Foxcatcher wrestlers John Fisher and Kanamti Solomon, who told him they’d been released because they were black.

Shortly after, the U.S. national team conducted a practice in Iowa City, the site of the 1995 NCAA Championships. Jackson, who called du Pont repeatedly to try to discuss the situation, ran into Foxcatcher coach Greg Strobel in an elevator at Carver-Hawkeye Arena.

Iowa coach Tom Brands, about six months before the end of his career with the Hawkeyes, traveled to Foxcatcher Farm with Terry to interview for spots on the team. The experience was unlike any they have experienced — before or since.

"We got there and they gave us this quiz with 100 questions on it," Tom Brands said. "It had to do with everything from how polite you were, to commitment, to …"

Terry Brands broke in: "… to ‘How do you fold your uniform when it comes out of the dryer.’"

The Brands brothers never heard how they scored but were told du Pont was thrilled with the results. The next day, they were members of Team Foxcatcher.

"Looking back, it’s easy to say. But what’s abnormal? What’s crazy?" Tom Brands said. "Now that it all happened, dang straight he was crazy."

The dilemma for those involved with Team Foxcatcher was weighing the reward and risk of a benefactor deteriorating in ways that stretched even farther than some imagined possible.

The Brands brothers found out from a 7 a.m. meeting while they were competing in Russia. Jackson learned about the unthinkable in a phone call from fellow wrestler Melvin Douglas.